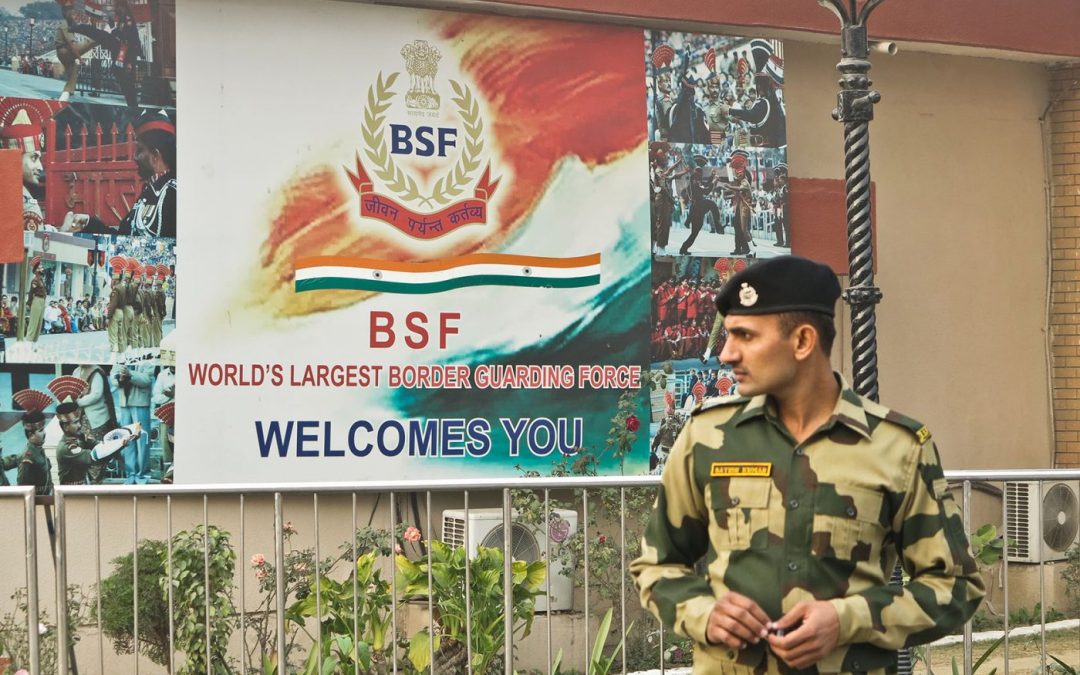 The launch of the Indus Peace Park Project comes at a time when tensions between the two neighbours have been heightened over the disputed region of Kashmir.

The project is designed to bring the peoples of Pakistan and India closer together in harmony.

The aim is to create an international peace park on the border of India and Pakistan by August 2022 to promote lasting peace, goodwill and collaboration and to put a stop to loss of life across the border.

The Indus Peace Park Project is an initiative being led and supported by Rotary members from around the world, including leading Rotarians in India and Pakistan who were behind the start of the project.

The project was conceived in 2015 when a Rotary Friendship Exchange Group from Canada was unable, due to tensions between India and Pakistan, to attend a cricket match in Faisalabad, Pakistan. 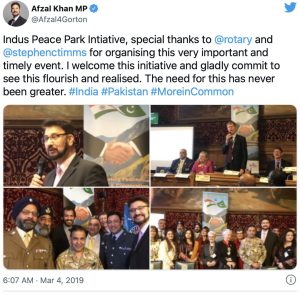 The group was also restricted from observing a Changing of the Guard ceremony on the India-Pakistan border at Wagah, on the Grand Trunk Road between Lahore and Amritsar.

The Friendship Exchange Group leader, Rotarian Kees van der Pol, from British Columbia Canada, who is Director on the Waterton-Glacier International Peace Park Association (WGIPPA), suggested the creation of an international peace park on “no-man’s land” between India and Pakistan.

The WGIPPAbrought about the world’s first peace park in 1932, straddling the Alberta, Canada and Montana, USA border.

We need innovation to build peace across borders.”

Kees van der Pol, who chairs the Indus Peace Park Project committee, said at the launch, “Why not create an “oasis of peace” within which people can get at from both sides of the border to share their common heritage, to celebrate, to share meals, to enjoy each other’s’ culture, and simply to talk about how to make the future brighter for all?

“Why not provide an alternative to 75 years of accusations, aggression and war?

“Why not be the beacon of hope in these troubled times and why not create an international peace park?”

The plan is to secure an area of 10 hectares (25 acres) of land (5 in Pakistan, 5 in India), on either side of the border.  This would be maintained by members of Rotary, Rotaract and Interact from both countries.

The launch event at the House of Commons was hosted by MP Stephen Timms and speakers included Lord Navnit Dholakia OBE, leading Rotary members in Britain, from India and Pakistan, representatives from the Commonwealth Secretariat, politicians and London Mayors. 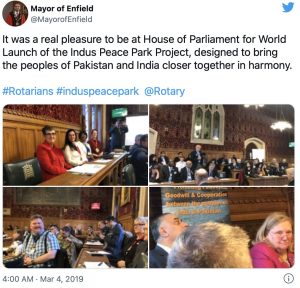 Stephen Timms said, “I applaud this initiative which I think is a very welcome step to take at what, as all of us know, has proved to be a difficult time and this strikes me as a particularly timely initiative to be taking at this moment.

“I do think that the vision that this initiative represents for a peaceful future across the border between India and Pakistan Is a very commendable one and one that I think that there will be a great deal of enthusiasm for.

“We need innovation to build peace across borders, it is very important.”

Lord Dholakia added, “In the last few days we have seen conflict arising on the Indian sub-continent and I think it is very, very easy to fight a war but it is very difficult to establish peace and when I saw this particular initiative about the Indus Peace Park project, I felt  something here is very positive.

“People who care, people who are concerned about what is going on in the country and prepared to put their head on the block and say let’s establish something by which we can establish peace on a long term basis for which I congratulate all of you who are involved in this very important project.

It is very easy to fight a war, but it is very difficult to establish peace.”

“There is never a better time to talk about peace than now, when you see conflict across the world, if you look at what is going on in Venezuela and the Middle East, and I think every effort that we can make that makes life much better is good.

“When I look at this particular project about establishing the Peace Park that makes me very comfortable, that makes me comfortable because it breaks the language of war and you start to hear about how peace can be established.”

MP Afzal Khan also gave his backing at the world launch of the project, “I give my support and would like to thank Rotarians for this amazing project, this ongoing project. I welcome this initiative and gladly commit to see this flourish and realised. The need for this has never been greater.”